August 12, 2021No comment
0Share
“It is not often that a business magazine will confer a man of the cloth with an award…” said Paul Adefarasin in his recent acceptance speech for Forbes Most Influential Personality in Africa 2021 Award.
“It is a most encouraging award, given the backdrop of the work that we do, as well as the attendant challenges of the work…” he added; in his keynote address.
Forbes Best of Africa Awards celebrates individuals whose influence impacts the continent of Africa in the areas of leadership, business, economics and politics.
Adefarasin is the founder of Megachurch, House on the Rock and also founder/president of The Rock Foundation; a charity organisation committed to social reformation, education, provision of healthcare and relief work for the disadvantaged in Nigeria and West Africa. The charity provided over 15,000 PPE gear as part of its COVID relief initiative during the pandemic. Since the year 2000 it has fed over 200,000 families through its various feeding projects, provided legal aid and advocacy services leading to the release of over 3000 prison inmates via their Legal Aid program, and equipped over 100 Lagos state schools with computer laboratories. Adefarasin is personally involved in inter-religious dialogue as a measure to ensure peace and tolerance between the various faiths in the country. 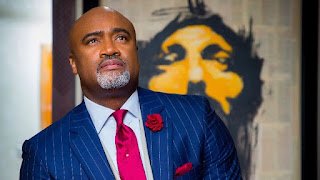 Widely recognised as the brains behind the largest gospel concert on the globe; “The Experience,” Adefarasin describes the event as “…a focal gathering point for the Christian community and its many constituencies from across Nigeria, Africa and indeed the world.” Over the past fifteen years the event’s line-up has included: Kirk Franklin, Cece Winans, Planet Shakers, Donnie McClurkin, Maverick City Music, Travis Greene, Tim Godfrey, Sonnie Badu, Chioma Jesus, and Onos, amongst many others. Hundreds of thousands flock to Tafawa Balewa Square yearly to join host Paul Adefarasin and the world’s most celebrated gospel artists for The Experience Lagos.
Adefarasins’ poignant keynote address on Leadership and Philanthropy at the awards event was a masterclass in effective leadership:  “…There are two critical virtues a leader should have: management skills and a humane heart. If a leader has management skills but lacks a caring heart, the leader will merely run a government, but will fail to lead a people into nationhood. On the other hand, if a leader has a wonderfully caring heart but lacks management skills, he will do enormous damage to the economy and the polity. A philanthropic disposition ought to accompany managerial skills. The leader should be able to manage resources, and also be compassionate. Therefore, leadership and philanthropic disposition are two sides of the same coin. A one-sided coin is not legal tender in the affairs of men. Both sides of the coin are necessary,” he said.
Written by Akosua DF, Premier Gospel Presenter
Tuesday, 10 August 2021
Source: premiergospel.org.uk
Share on FacebookShare on Twitter
August 12, 2021
Leave a reply